Big and Beautiful in Black and White

Sometimes mysterious forces align and my artistic life takes an unexpected and interesting turn. This happened late in May 2012 when I was contacted by NYC interior designer Kelly Behun and commissioned to create a black-and-white mosaic on a massive sculptural form that would become the base for a custom dining table. The table would be part of a collection of limited-edition, high-end contemporary furniture designed by Kelly and her assistant Alex P. White for Kelly Behun Studio (KBS). The collection as a whole would be inspired by designs evocative of noted 20th century artists and designers and each piece would represent a collaboration between Kelly and Alex and one or more contemporary artists/artisans sourced by KBS.

For a look into the stylish world of Kelly Behun Studio, see www.kellybehun.com.

The mosaic project was on a fast track, less than 12 weeks from initial contact to delivery. Detailed planning began at once. At a meeting in NYC, I spread out a range of materials and textures in the color palette we had discussed. Kelly and Alex were familiar with contemporary mosaics and had a good sense of how they wanted the mosaic surface to look, though for a short time we considered combining the unglazed porcelain tile they favored with handmade ceramic elements and/or raku-fired tile in a complementary palette. I worked up some sample boards showing how these materials could be combined. In the end, however, as we saw photos of the sculpture-in-progress, Kelly and Alex zeroed in on an undulating, sinuous design for the mosaic, and it became clear that the bold graphic pattern would read best if we restricted the colors to black and an off-white and kept the materials palette free of distracting elements.

The table base was delivered to my Skillman, NJ studio on June 15th. It had been sculpted in two massive pieces of solid cork (very heavy!) by Robert Brou of Naturalism Furniture in Atlanta, GA to resemble a pair of soft-edged tree stumps leaning toward each other. Ultimately, the two parts would be joined across a “bridge” designed to support an oversized tabletop fabricated in rare Macassar ebony (the top also created by Robert Brou). 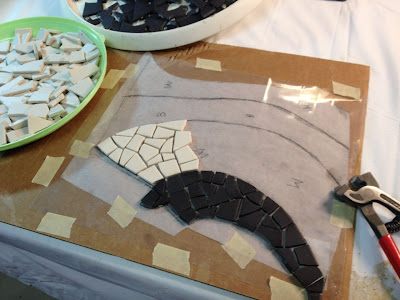 I created the mosaic on adhesive film over a pattern traced from a section of the design. When the section was complete, a second sheet of film was laid over it, creating a mosaic "sandwich." 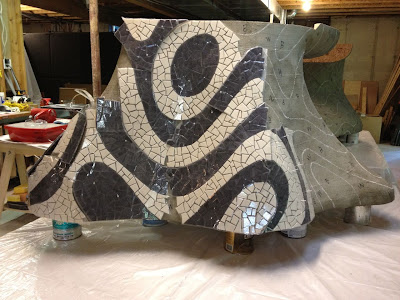 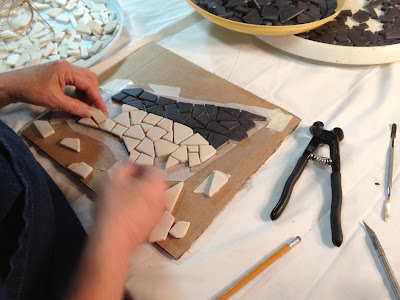 Each day I photographed my progress and sent images to Kelly and Alex. We all were excited to see the mosaic grow as the tile snaked its way around the curvy forms. 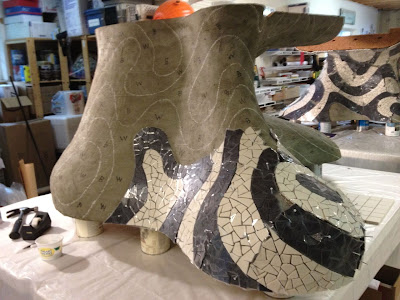 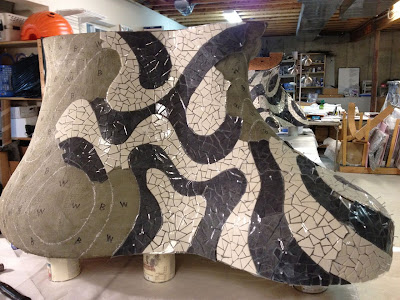 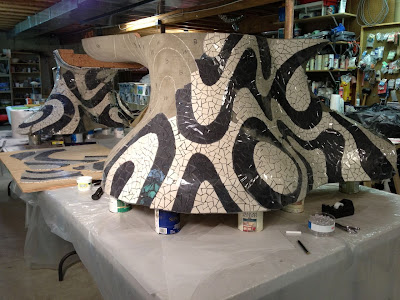 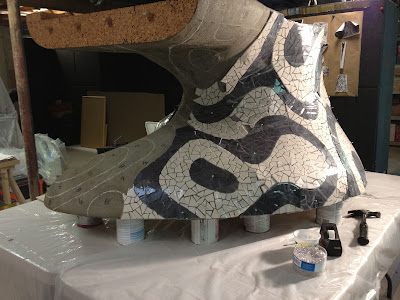 The sequence above shows the mosaic taking shape on the larger of the two bases while the smaller base, almost complete, can be seen in the background. 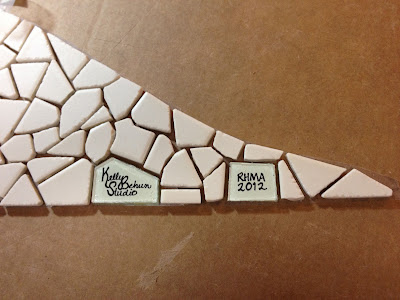 Signature tiles were incorporated into the mosaic.

By July 30th, the mosaic-making phase was complete and I began attaching the sections to the base with a thinset made of Laticrete 1500 sanded grout and Laticrete 4237 latex additive, a mixture that guaranteed a solid installation. This is always a messy, labor-intensive process that proceeds on its own timetable, a function of hard-to-control factors like humidity, drying time, ease of cleanup, etc.

I began with the smaller of the two bases, moving around the form section by small section, preparing the surface with a thin bed of the setting material, combing over this layer with a notched trowel, then pressing each back-buttered section into position, securing it with thin nails between the tiles to prevent slippage. Once each side of the sculpture was installed, I went back over it to fill in any missing tiles, then applied fresh grout to fill in any gaps.  My assistant on this phase was Spring Paul, a student on break from Moore College of Art and Design in Philadelphia. Spring was great to work with: careful, conscientious, and indefatigable. Having an extra pair of hands for four long days of grouting and rinsing and wipe-down and finishing kept the project on track.

The photo sequence below shows some steps in the installation process. 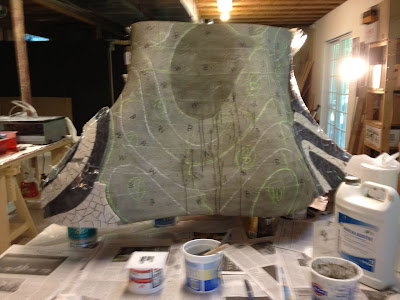 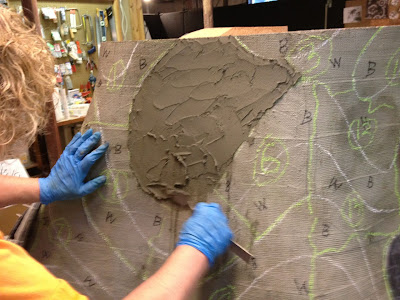 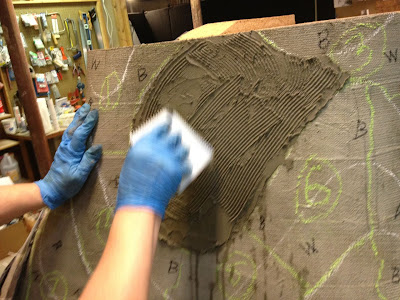 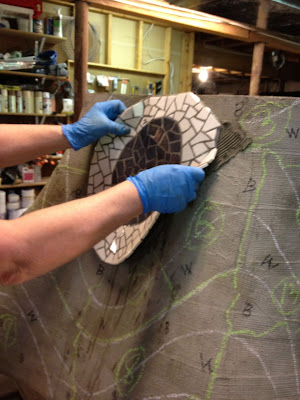 All finishing work was complete by August 8th, just one day before the mosaic was scheduled for pickup.  A carpenter temporarily removed a studio door to allow safe passage of the two bases, now considerably heavier with the addition of tile and grout. Each base required four men to carry it out and to the waiting truck.

After a short stop at a luxury beachside residence in the Hamptons to be united with its tabletop and photographed with other furniture in the new collection, the Loggia Mosaic Table was trucked to New York City's R 20th Century Gallery in Tribeca for the Kelly Behun Studio show, “After,” running September 20th­–October 27th.


To see other KBS custom limited-edition furniture created for the collection, check out the very cool video featuring SKOTE, filmed at the gallery. http://vimeo.com/49656519

The KBS “After” furniture line received enthusiastic press coverage in the New York Times (September 19), in the online edition of the Wall Street Journal (September 20), in Manhattan Modern Luxury magazine (October), in Dwell (October), and in numerous design blogs. For the mosaics community, the SKOTE video made in connection with the show was featured on Mosaic Art Now online.

Posted by Writing Between the Tiles at 1:52 PM

Writing Between the Tiles